Wow, what a hectic yet amazing couple of months. As some of you may know, I recently packed up all my stuff back home in Australia and put it into storage to embark on a working holiday around Europe and the UK for a year or more. So far, though, it has been all holiday and no work. It's kind of fun being homeless and unemployed :)

Progress on ColdExt has been a little bit slower than I had hoped, but it's going well just the same. I've been able to fit in some coding on lazy mornings in the Netherlands, on the trains through Italy, on cheap Ryanair flights (though it's difficult with a 15" notebook and no elbow room), and even managed to tinker with a few demos in between sessions at Scotch on the Rocks (what a superb conference - I want to attend again next year!).

So what has changed since my last blog post and the Beta 1 release? Well, quite a lot actually. I'm calling this the Beta 2 "Preview" release because the documentation and demos haven't been finished but the majority of the tag support is there. 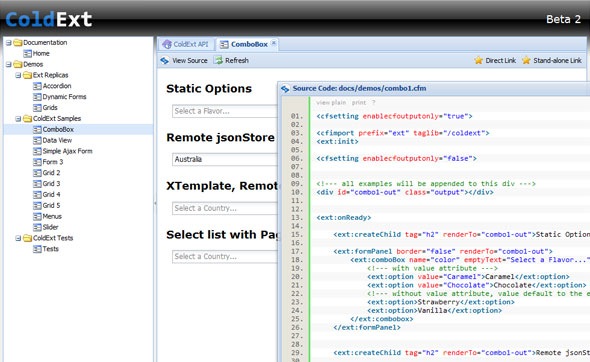 I'd like to thank the people that have been using ColdExt, reporting issues and assisting with new ideas and tag implementations. I know I haven't got around to implementing all of them yet but rest assured they are on my Todo lists in Basecamp. I particularly want to get to some of the Ext JS User Extensions (such as Paged Row Numberer, Grid Filters and Radio Groups) before releasing Beta 2 "proper". Until then, have a look at the ColdExt Beta 2 "Preview" Demos to get a taste of Ext goodness :)